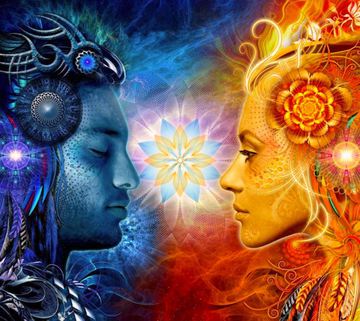 One of the things that can make creating in a deliberate and willful manner confusing is that we’re always using one aspect of our mind to direct and command another aspect, both of which speak a different language and work by different means to create what we experience as a unified “reality”. All of what we can call “actual creation” as a manifestation is done by the subconscious while being directed by the conscious mind through our feelings and thoughts. We become what we think about because we’re literally programming ourselves and forming our perception of reality through our thoughts. The words we speak while imagining them as a reality or experience that invoke a strong emotion of some kind in response to them, is serving to give our subconscious a directive for creating as an outer experience.

Reality and the Illusion of Time

The mind itself with its varying aspects operates on different planes and scales simultaneously performing different functions of what results in a unified experience of reality. The subconscious exists “outside of time” (which is a dimension created by the conscious mind) and is always “present” in what we can think of as the “eternal now”. Our self-conscious mind (of outer awareness) exists within the time-space dimension of its own creation, and spends most of its time dwelling in the past or contemplating the future and is hardly ever present in the moment. The subconscious is “experiential” in nature, feeling oriented, and emotionally driven, and is what forms all of our natural perceptions and behaviors in a fully automatic and habitual manner. Our perception of the outer world is being produced by our subconscious while being witnessed and observed by our conscious mind. Our energetic “state” is what acts to unify both aspects into a coherent whole where together they call forth, organize into a thematic pattern, and produce our reality as a “direct experience” of it.

Learning to Speak the Language of the Soul

When we set a goal using our conscious mind, we tend to set it for the future while forming a realization around the fact that we don’t already have it. Because the desired reality is perceived as being in the future (time) somewhere and not already present, the subconscious doesn’t register it (it has no awareness of the future), and instead registers the feeling of “wanting it”. So wanting what we don’t have becomes the directive as a kind of “theme” for the subconscious to use in creating more realities and experiences of “wanting”. The subconscious functions to create reality as an outer manifestation of an inner reality formed out of feelings, ideas, and thoughts, and doesn’t need instructions on “how to” manifest something, but merely a metaphorical idea of “what” to create as a feeling state. All experience serves to give us more of the same feelings that acted to produce it.

For this reason all goals need to be formed in the imagination “as if” they’re real and from “within” the experience of it. Whatever emotion we associate to the desired situation or event tells the subconscious how to formulate it in order to create more of the same emotion through the nature of the experience produced. The goal has to be formed as an internal representation of a metaphorical idea imbued with strong feelings. We have to create it as a form of “virtual memory” (reality) that can take the place of an actual memory. The outer appearance as a certain type of reality merely cloaks the feeling that serves to birth and animate it allowing us to form a certain type of experience out of it. The reality itself isn’t what’s significant; it merely lays the foundation and sets the stage for how we form our experience of it. It can’t be thought of as something we’re “going” to work towards and hopefully create at some point in the future, because the reality of not having it “is” the directive being given to create more experiences of the same nature.

The other thing we need to keep in mind is that the mind works in a completely holistic manner. It’s only the self-conscious mind that perceives duality and separation as our outer awareness of space and time. The subconscious is also a fundamental part of the group mind of the collective unconscious and what the self-conscious perceives as being “out there” is being produced by the subconscious on a larger scale without our direct awareness of it. Whereas the self-conscious mind perceives in “separate parts” that make up a whole that are often unrelated and independent of each other as a kind of “this or that” or “black and white” mentality (that believes in the illusion being created), the subconscious is holistic and produces reality out of our mental paradigm as our soul’s essence (memory as integrated experiences). It creates out of our entire psychology as the means of producing an experience of ourselves as a reality.

What this means is that it’s not only the goal itself as a reality that’s taken into consideration, but also the reason you have for setting the goal. What is it that’s “motivating” the goal? Our motives in doing whatever it is we’re doing directly influences and alter the outcome being produced. Many of our motives are emotional in nature and result from deep seated unresolved issues that we’re not fully aware of. These motivating forces play a role in shaping the outcome, and can come in a way that seems to contradict what we thought we were asking for.

A person who wants to manifest a relationship where they’ll “feel wanted and loved”, means they currently don’t feel that way, and again are projecting a wish for what they don’t have out of feelings of not being loved and wanted. All relationships attracted and actively engaged in will only act to produce “more feelings” of not being wanted because this is the state that gave rise to the desire for a relationship to fulfill that they currently lacked. If we feel unhappy, and we imagine it to be due to a lack of money, and we set a goal to make more money as the means of becoming happy, we may in fact produce the material wealth we desired and envisioned, only to have it accentuate and deepen the feeling of being unhappy. This is because it was designed out of feelings of being unhappy.

All manifestation is naturally produced in a fully unconscious way as our feelings that give rise to our thoughts that shape them into images and scenario’s that act to invoke an equivalent emotion, and together produce a reality as an experience. Whatever image we form in response to a feeling is the reality that expresses that feeling and acts to give us more of it. If we “ask” for something out of a feeling of lack, what we’re really saying to our subconscious is “give me more of this feeling”. All outer manifestations are produced as a reflection and equivalent of “inner manifestations” of feelings and thoughts because they’re both being produced by the same mind through our mental paradigm. The outer is a continuation of the inner on a larger scale.

We have to start all conscious manifestation by accessing the feeling inside of already having what it is we’re going to create. If we ask for something as a means of giving us a feeling we don’t already have, we simply create more of that feeling because it’s the feeling that acts as the directive telling the subconscious what to multiply and produce more of. All material reality is designed to give us more of the feeling that motivated and spawned its creation. While submerged in the feeling of “not having”, which is what gives rise to our request to acquire it, only acts to produce the reality as the experience of wanting.

Instead of focusing on what we lack and then trying to determine what type of reality will give us that, ask yourself what feeling is it that your desired manifestation will serve to give you. Then focus exclusively on that feeling, amplifying it, and allow the reality associated with it to naturally form of its own volition in your imagination. Let go of all need to determine what the reality is, and let it form as the expression of the feeling. As the image or reality rises naturally out of the feeling, don’t try to change or correct it to what you think it should be, but let it form spontaneously, while maintaining your attention on the feeling. All material images and actual realities serve only as a metaphor for the subconscious, which creates through the Law of Analogy and Correspondences. Allow yourself to realize intuitively that the “feeling” is the creative directive that the subconscious will use as the means of producing the reality that will be “of” that feeling and serve to give you more of it . . .

The Nature of the Subconscious – The Unified Mind of the Material Plane
We often hear sayings about “oneness” and everything being one, living in unity with Nature and each other, and so on, y...
DNA Transformation – The Law of the Tetrad
The Universal Laws demonstrated in Sacred Geometry provide us with the practical tools for learning how to use our mind ...
Understanding the Spiritual Power of Fear
Fear is one of the most powerful spiritual forces there are due to how it functions on the human psyche and within the ...
Mind-Body Medicine: Understanding the Relationship between Thought, Emotion, and Physical Manifestations
The easiest way to understand the mind-body connection isn’t through researching endless forms of scientific data formed...
Thought-Forms: Scalar Energy, Electromagnetic Fields, and Bio-Holograms
Both the Pineal gland and the DNA of our cellular structure are composed of liquid crystalline substances that act as a ...
Intuition – Energetic Currents and the Synchronistic Flow of Spiritual Guidance
All of life at the energetic level flows in currents as frequencies. A frequency is formed by all information or ideas o...
Intuition – Clairvoyance, Premonition, and Attaining Higher Knowledge
Intuition forms what we tend to call our sixth sense, which comes predominately as a “feeling” or sense we have about s...
Human Will as Speech directs the Forces of the Subconscious Mind
What we symbolically refer to as the “serpent power” in esoteric sciences is the Astral Light of the Formative planes t...