Huna is the Polynesian practice of the Secret Sciences as applied psychology and Natural Laws. It develops psychic powers of the mind that promote natural healing abilities that were once considered miraculous. Huna, like all the Secret Sciences is experimental work based on a different “system of beliefs” out of which the practice is based. Like all Secret Knowledge it can only be truly obtained through experience and therefore must be practiced through formulated ritual and ceremony.

Huna is NOT a religion, but rather a practical system designed to develop higher spiritual faculties of the human mind/body system in order to perform supernatural abilities. It is more of a philosophy that gives practical training in mind development and Energetic Healing Arts. It is based out of Spiritual Law and “truths” that ultimately pervade all psycho-religious systems.

Because of this, Huna, like Hermetic Sciences, is compatible with all world religions and spiritual systems. It does not interfere with or contradict any of them, but rather makes possible greater and more in-depth understanding of the ancient truths that underlie all fundamental systems of belief. This system is not designed to start a secret cult or new religion, but rather to provide the means and methods for helping ourselves and others. This system of beliefs, unlike others, is a living system and so continues to evolve through new and varied methods of practice and application as well as through changing times. It is not dogmatic, but rather adaptable, fluctuating, and constantly allowing new information to be revealed and brought into light.

Hula Dancing is a form of symbolic story-telling. A moving Prayer in Harmony with the flow of nature and the Dynamic Dance of the Cosmos. 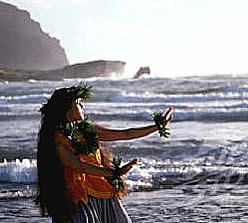 The goal of this work is not only the healing of the body and mind, and social and economic tangles – but also to revive lost knowledge and a way of life that was not only taught by the Kahunas, but by Jesus and many other great Initiates under the ancient code of secrecy. This code, originally designed to protect the knowledge from corruption, misinterpretation, and improper use of great power for self-indulgence, can be taught only to those who “have eyes to see, and ears to hear”. It requires a certain understanding of Natural Laws and Spiritual Wisdom that is not comprehensible to most because it requires interpretation through the masterful use of the Law of Analogies and correspondences. It is based on the secret language hidden in everyday language that can only be perceived by those who possess highly developed ability to intuit symbolic ideas in order to reveal their hidden meaning. The knowledge itself is communicated in the universal language of symbolism, music, dance, numbers and analogies based on unity and interconnectedness.

This great knowledge of Magic migrated from Ancient Egypt at the time of the last world cataclysm. Ancient religious systems that performed miracles from the special use of psychology and an in-depth knowledge of the spirit as the energy system of the mind/body. The language itself is important because it requires different ways of perceiving the world that are necessary in order to be understood. Words form concepts as models for perception that reveal the principles that are operating within any given practice.

Huna knowledge is mentioned in the Bible as the miracles (Magic) that were performed by the great Initiates as references that underlie the typical Huna symbols that ultimately form the secret code. Moses and Aaron from Egypt, Isaiah and Jeremiah speak in very plain Huna terms. Jesus, the great Initiate taught the same beliefs using the same practices and symbols to Initiate his disciples. Jesus performed the same type of miracles, in the same manner as Huna, and honored Ancient Occult Wisdom with great care not to reveal it secrets to the profane (ordinary). He taught his disciples the mystery teachings concerning the “Kingdom of Heaven” so that they could become practiced and able to perform miracles through a masterful understanding of hidden truth.

To the Kahuna’s, power came through prayer by way of some unseen force that acted as a medium (field). Prayer to them was a symbolic ritual of chants (thought/word), music (harmonious vibration) and dance (flowing movement as action). An unseen Life-Force of Supreme Intelligence could be directed or commanded by use of the human will focused and called forth through the “spoken word”. This was the art of the psychic sciences and applied psychology that Quantum Physics has developed in modern times that runs directly parallel to Ancient Knowledge of the Shamans, Magus and Yogi’s. The ability of consciousness to directly influence the behavior of matter at the energetic level.

Hula is a form of artistic Prayer that embraced the natural heartbeat and cycles of Nature through rhythmic and graceful movement performed with focused concentration and the free-flow of a joyous attitude as an expression celebration and deep abiding honor for Life.

Hawaiian Shamanism is a distinct form of healing that sets it apart from other Shamanic practices. The outstanding quality of a Shaman, regardless of culture is the natural inclination towards engagement with the natural forces through creative activity. Passive acceptance of knowledge and understanding are not desirable or appealing in any way. The Shaman plunges into life as the mind and senses and fully plays the role of creator. The Shaman is more like and active artist, who does not simply admire the design of an uprooted tree within the landscape, but transforms it into an internal image that becomes an analogy as a creative tool. While there is a natural admiration and respect for the tree as it is, at the same time there is a natural impulse to merge with the tree in order to create something new by directly influencing it. This “activism” that works directly with and on natural forces and elements is the primary function of the Shaman and Initiate that makes them natural healers.

The Shaman is a holistic healer of the whole person (mind/body) and circumstances. Shamanism is ultimately geared towards personal, social and environmental benefit through a single act. This alone distinguishes a true Shaman from the Sorcerer of Castaneda’s model who openly pursued personal-power that ultimately resulted in enlightenment.

While Shamans are healers, they also follow the “Way of the Warrior”. Hawaiian Shamans calls this the “Way of the Adventurer”. The Warrior Shaman, as described by Serge Kahili King (Huna Teacher), personifies fear or disharmony, and develops power, control, and combat skills in order to deal with them. An “Adventurer Shaman” by contrast, tends to personify these conditions, treats them as effects and not things, and deals with them by developing the skills of love, cooperation, and harmony. The more powerful you are, the more loving you are, and therefore, the more loving you are, the more powerful you become.

So Shamanism, which stems from the Ancient Wisdom of Egypt originally known as Hermetic Sciences, not only establish the 36 books of the Natural sciences, but also the 6 books of Healing Arts which was based primarily on advanced knowledge of Energy Medicine and Herbal treatments. The staff of Hermes is still used as the emblem of modern medicine.

Alchemy – The Art of Personal Transformation