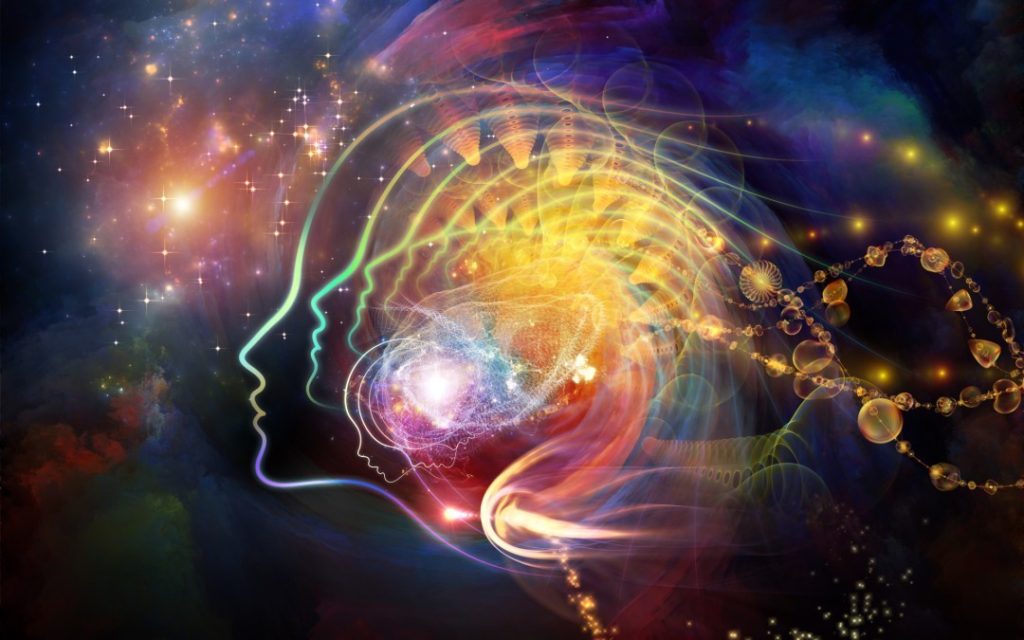 The words we speak not only express the mental images running through our mind, but act to shape those same type of mental images in the mind of whomever we’re speaking to. We not only form mental pictures based on the words themselves being used, but also coordinate feelings and emotions associated with the mental pictures based on “how” they’re being spoken in terms of tone, voice quality, attitude, or the emotional state of the person speaking them. Words not only form our communication to others, but are also how we communicate with ourselves through thinking. Thoughts are a form of internal self-dialogue that as we think them, we form corresponding mental imagery as the reality inherent in the words.

Because words have images associated to them, they form the basis for creating reality, first by thinking, feeling, and forming them internally as imagined realities, then by expressing that same reality externally by speaking them or telling another about the same internal imagining. You can tell how a person thinks by listening to them talk. They talk about the same things in the same way that they think about them. While many people believe that what they perceive and therefore communicate out of is and objective reality that’s being experienced in much the same way by everyone else, the fact of the matter is, everyone is always creating a subjective experience of an outer reality that’s unique to them, which is structured by and expresses their mental paradigm, which we all use to create our experiences.

Every single individual who also has an individual mind, is constantly creating their own personal version of a shared reality. No two people experience the same conditions, circumstances, or event the same way. While we all do share universal qualities and characteristics that form a theme of sorts, and we all posses a mind that operates according to the same principles, each one of us is formulated in a slightly different way that forms an entirely unique personality. Each one of us is also comprised of a soul which is fashioned over time based on how we perceive reality, and creates our experiences of that reality forming memories, and who we become by way of our own creations. 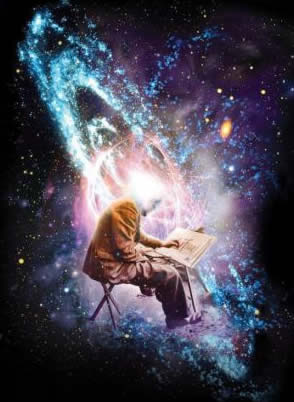 Our thoughts, which come to us as ideas being expressed verbally as a conversation we’re always holding with ourselves, that can often involve several sub-personalities that appear to be discussing the same thing from different perspectives, or arguing their point in a form of debate, are how we form consistent realities that are all built around or out of a general meaning. Those thoughts as words spoken internally to ourselves form a consistent reality as a dynamic series of stories that all share or come out of the same basic theme, as what we could call fractal patterns (smaller patterns as the offspring of the parent pattern). These thematic stories evolve out of experiences that had significant emotional impact that formed memories that are used to form a basic story-line. These emotional memories become the basis for the thematic content of our most fundamental thoughts.

These “themes” are the “structuring mechanism” that forms our perceptual lens as an interpretation. As we perceive through these thematic patterns, we literally abstract and reorder into a new pattern the elements in an existing situation necessary to tell our story about it, while ignoring or not even noticing and including anything that contradicts or disproves our story. The mind is selective in what its able to perceive based on the mental filters as the model or energetic structure of the mind, which only tunes into and “sees” what is of the same nature or vibratory frequency as it is. The frequency is a thematic pattern or energetic structure that forms the basis for creating personal realities out of common elements and aspects in our outer surroundings.

Your thoughts as self-communication, or words spoken to yourself internally, are how you’re programming yourself through suggestions that become the basis for how and what you experience as your perception of reality. Your thoughts as words that form mental impressions as movie like scenarios that tell a specific type of story by how it frames everything, is what you could think of as your vibratory frequency, and how you’re tuned (self-programmed), which forms the basis for what type of thoughts you broadcast as well as receive, and what type of people and situations you naturally attract, notice, and interact with.

“In the beginning was the Word, and the Word was with God, and with the Word God called forth all of life” 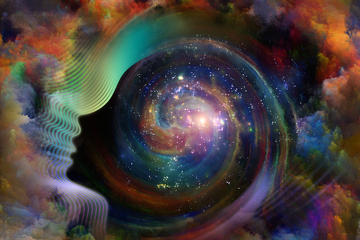 The power of the word is that it gives the mind a pattern as a form of template to shape astral light (the mental essence that shapes images) into living realities in the imagination. As we continue thinking the same type of thoughts, telling ourselves the same type of stories, and telling our stories to others, forming our reality in their minds also in reference to us, we act to systematically build-up that idea, strengthening it by controlling the imagination of others to form the same reality as a consensus, and use that reality to interpret all other realities, making it “real” as our experience. By recognizing our own power to create our own experiences and self-reflecting on how we think on a regular basis, and listen to ourselves talk to others, we can “see” that our life is actually our own creation as the corresponding outer reality that matches our inner reality. It’s not that we literally produce the outer, but rather filter out only the elements in the outer that can be reorganized to tell our story using them. We structure reality as an ordering-organizing system that takes any situation, and only “sees” (notices, pulls out, and reorganizes it) what can readily be used to tell the same type of story. We only see what we’re programmed to see. We reorganize situations by how we interpret them. Our interpretation comes through a dynamic series of interwoven mental filters that accentuate and embellish some things, while leaving out or eliminating other things altogether. Anything that can’t be used logically to tell our story, or that would contradict and therefore disprove our story, we ignore or fail to even notice. 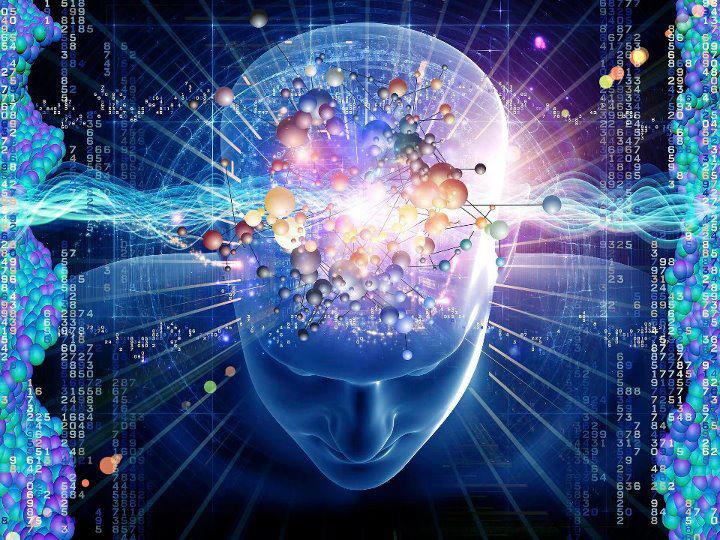 Words form patterns as a means of structuring reality to give it meaning. We think that we say what we do as a means of describing or expressing what’s happening “to us”, or as an objective interpretation of an obvious reality that everyone else is seeing the same way, without ever realizing that our description is whats actually creating our reality, not the other way around. This is because we have this idea that experience and reality are the same thing. That perception is reality. That reality is an objective, neutral and finite idea that’s playing out the same way for everybody, and that everybody is seeing the same thing that we are. And while this is partially true, reality, like all of life, is infinite, and being created out of a universal theme as objective – shared reality, that’s being used as the basis for creating an infinite number of personalized versions by every person-mind that’s apart of the same outer events. We’re always taking a universal idea as a basic archetype or generic idea that contains an infinite variety of potential based on how its used by the individual mind to create a personalized version of the same idea. Our individual mind, like the universal mind, is bestowed with the ability to create its own reality, and self-create by way of that reality.

We are the only one creating our experiences based on how we’re being stimulated by the outer world. All outer stimulus only comes by way of a shared vibration as a pattern or characteristic through resonance. We are only affected by what is of the same nature as we are in our outer environment. Outer stimulus is only capable of awakening and bringing into activities what’s already inside of us. How we’re stimulated and therefore influenced is based on what’s brought out in us and developed through an interaction as a behavioral dynamic that forms the basis for the story we begin telling ourselves “about” things as a way of making sense out of them , that make them “mean” something. The meaning we give things, means something about us, about others, and about the world or the way things are. This forms the basic theme that fits multiple levels of reality into a congruent idea that’s consistent and therefore believable.

How to Work with Your Subtle Body as Your Mind in Order to Transform Your Reality
Many who have been tutored in the energetic arts have been taught that what we refer to as our “subtle body” serves as ...
The Power of the Spoken Word – Vibration, Harmonic Resonance, and the Holographic Principle
All “sound” as vibration has a pattern inherent in it as well as a creative or formative power commonly referred to as a...
Frequencies and Thought Transmission – Waves as Infinite Potential of Associated Ideas
We tend to think of thought transmission or mental projection of an idea as “sending” a specific idea or thought-form it...
The Subconscious Mind as the Vehicle for the Soul and the Secret to the Manifestation of Cosmic Will
The aspect of the mind known as the subconscious mind is also what we can think of as our “body consciousness” and is sy...
Mass Brainwashing - Mastering your Will and Learning how to take back Control your Mind
In our modern day society of constant sensory stimulation and information overload, our minds tend to be constantly raci...
The Astral Plane of the Aether, The Akashic Field of Cosmic Memory, and the Yetzirah World of Formation
What we call the spiritual world is comprised of invisible forces of a highly intelligent nature that act through unive...
Learning how to Operate your Own Mind - The Power of Questions, Wondering, and Curiosity
One of the best ways to Learn how to use the Power of Attraction, is by Learning how to ask Meaningful Questions We’ve a...
A New Way of Understanding the True Nature of the Subconscious Mind
We Exist in a Primary State of Self-Hypnosis where we Self-Create and Form all of our Life Experiences The most basic pr...