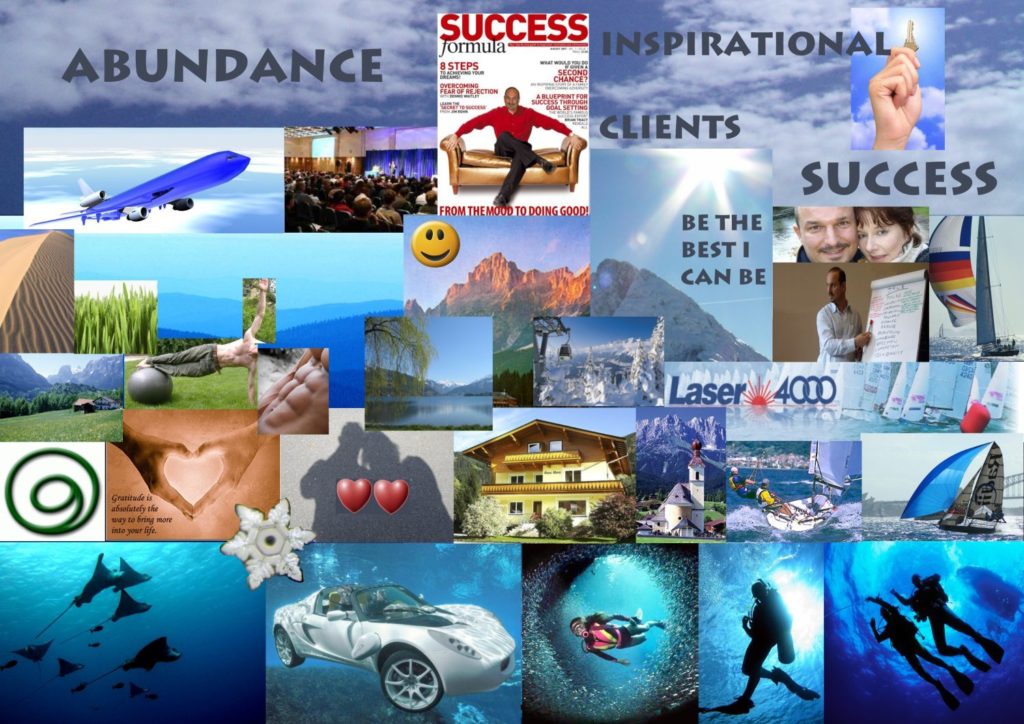 Many of us have heard that any goal that’s written down has a greater chance of being actualized than one that’s not. And while this is true, the way the mind naturally creates realities is through imagining them as actual experiences. By creating a reality out of a goal, we form an internal representation as a conceptualization of that goal as a possibility, which makes it believable, while giving us a mental template for perceiving it and acting it out. Psychologically speaking, we can only “do” what we can first imagine. We are only capable of behaviors that we can “see ourselves” doing. Imagining an idea is a prerequisite for creating it as an outer experience.

When we form a sensory reality of a goal “as if” it’s real and already happening, we give the subconscious mind (responsible for all behaviors) a “program” as a form of virtual memory which it uses in place of actual memory and acts to automatically create it. When we envision a reality, we are setting a pattern as a request that says . . . give me more of this. We program the mind to seek it out and recognize what is of the same nature and can be used to create a similar experience in our environment. At the same time, when envisioning a desired reality, we sense ourselves in that experience, and identify with it. This not only hones our vibratory frequency to that reality as a state-of-mind, but also programs the mind to seek it out through a form of resonance. It magnetizes the idea internally as a guidance system that moves us towards its fulfillment, and draws the elements of its fulfillment to us.

Anytime we create an internal reality around an idea, we form a dynamic series of associations to that idea as a variety of experiences inherent in the potential the idea holds for us, that causes us to recognize ideas of the same nature, though they may appear different than we imagined, and can spawn a series of coincidences that when followed or investigated, form a pathway for creating more of the same type of experiences. You want to vary how you imagine a goal as a reality to ensure that you don’t get stuck on only one possibility for how it could show up. You want to release any attachments you have to needing it to be something specific, but rather concentrate on the feeling the idea represents, and allow a chain of association to arise out of it as a reality. Any formulated experience is based on the “feeling” it represents and has to come by way of whatever is available in your immediate environment as a way of manifesting in your everyday life. How it shows up will be based on the elements in near proximity to you that are of the same nature and can be used to co-create the same type of experience. Though it may vary in appearance, the feeling it gives you will be the same. If you get set on it needing to show up or appear in a specific way, you may miss it when it actually comes as a variation. 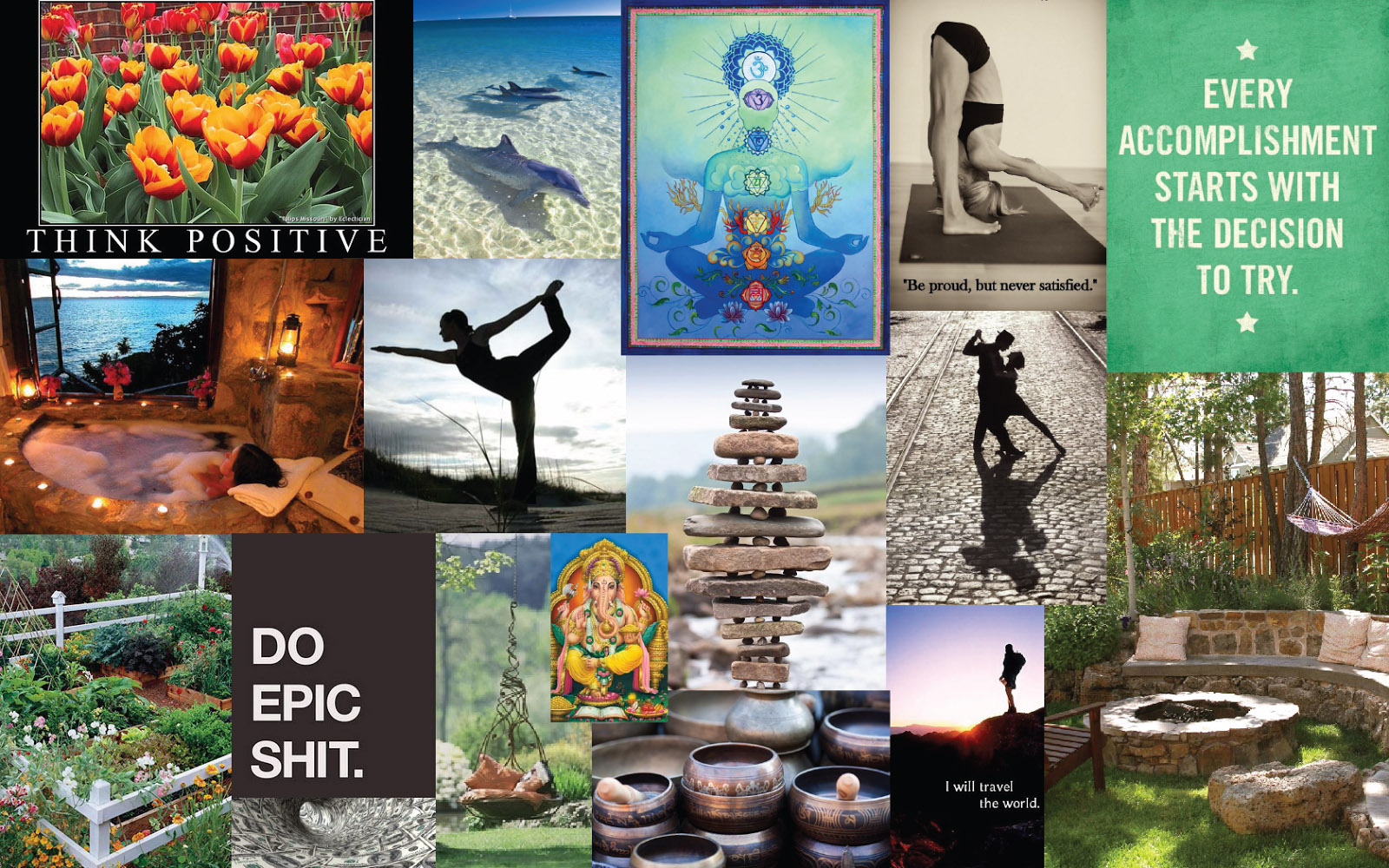 When setting a goal of any kind, notice the feeling associated with that goal, what the goal represents in terms of the type of experience it will give you, and then allow realities as possibilities to naturally emerge as a free-flowing chain of association that amplifies the feeling by creating more of it. Then, when the feeling is amplified, become aware of how it feels in your body, concentrate on it and seat it. This feeling as a distinct movement in your body that acts as a stimulus is not only your beacon, but also your homing device. It’s your means of recognizing in your environment what’s of the same nature and acts to stimulate you with that same feeling, which will lend itself naturally to co-create experiences that will express and give you more of that same feeling. The feeling (vibratory frequency) is the common denominator. The inner realities as images that invoke specific feelings are simply potentials of that feeling that help you recognize the idea in it’s various forms and as clothed in many different ways, making it appear different. An internal feeling creates a certain type of experience as a living reality in the external world.

As a general rule of thumb, whatever your vision as a goal of some kind is, should never involve other people, or require them to be apart of it in order to manifest it as a reality. The accomplishment of all goals should lie exclusively within your power to create. Because a goal of any kind ultimately represents a desired experience of some sort as a feeling, if you dream of having a certain type of experience with a specific person, and the true reality is that the experience they’ll bring you will be quite different than you imagine, then they are not of the same vibration and do not represent the fulfillment of your desire. You won’t be able to attract them with your vision. They won’t have a “role” in acting out the same type of reality with you. Instead, concentrate intensely on the feelings of the desired reality, and be as open as possible to whatever form it will come in. Release attachments to needing it to show up in only one form, and be open to completely new and often surprising alternatives.

To form a vision board, create an over-all plan for the coming year, and break that plan down into a series of goals as a step-by-step process necessary to create the over-all goal as a desired reality. Imagine the goals as experiences, and what image symbolizes or represents it, or what words or sayings are associated with it. Find pictures, words, sayings, or objects that symbolize all the goals necessary to create the ultimate outcome, and arrange them in an artistic and pleasing way on a piece of poster board or foam core. Then use it as a visual meditation, by imaging the ideas associated to the pictures, or by forming visions from the words and sayings. Whatever is on your board acts as the stimulus for a series of realities around the actualization of your goal as if you are experiencing it. As you meditate, form and associate very positive emotions around and towards your vision. Fall in love with it. As you imagine it as real and happening, stimulating very positive emotions in response to it, infuse it with love and a deep sense of gratitude and give thanks to the Universe for making it possible. Make this a regular, if not daily practice.

Conscious Relationships that Serve your Spiritual Development
Spiritual Sciences, which is all about personal growth and development, doesn’t view the idea of rel...
How we Create Ourselves through our Life Experiences
Once we gain a fundamental understanding of how consciousness as an energetic flow works, we can ac...
The Law of the Monad – The Brain, Membrane, and Will as the Spoken Word that Manifests a Correspondi...
The Monad is represented in a geometric form as a sphere or circle with a dot in the center, symboli...
Our First Birth – How we become a Product of our Conditioning
This process is very important to understand in order to heal psychologically and in order to inten...
Personal Transformation – Breaking Perceptual Patterns by Learning the Lesson they Hold for You
All of what we traditionally refer to as “karma” comes out of our mental paradigm that forms our per...
The Unified Reality of the Lower Plane and the Nature of the Subconscious Mind
There’s always a Divine Paradox playing out in the most basic sense as what appears to be a single r...