The imagination is greatly misunderstood by many people, even though we all have one, in terms of its true power. While the imagination can be used in a very creative way to produce and develop new ideas and works of art, it is also used in the more mundane sense to create fantasies as delusions by making up stories about things, or by replaying memories over and over as new variations that keep us always creating out of the past. Either way we use it, it provides a form of mental construct as the preliminary blueprint or thematic template for turning an idea into a physical reality.

Many confuse imagining with visualization, and as a result, draw the conclusion that they can’t visualize. Yet everyone can visualize and are doing it all the time through a form of recollection (memory as a mental imprint), or simply conceptualizing an idea as a way grasping it, or playing out possibilities as a form of anticipation. The imagination, while it works largely out of visualization, also works via all the senses, and comes just as readily as hearing something, feeling a certain way, sensing touch, smell, and so on. To imagine something is to create a sensory experience of it. Because senses are interconnected, and one automatically stimulates the others through a chain-of-association, no matter what triggers the imaginative process, a full reality as an inner experience of some sort is what results.

Memory or ideas thought about and imagined, come as a form of “invisible-translucent image” that’s similar to a reflection on glass, or the reflection on a dark surface (mirroring quality). We can replay memories in our mind while starring off into the space around us shifting our attention from the actual reality which fades into the background while giving our attention to the imaginary reality taking its place. We then play one reality over the top of the other one. While imaginary realities don’t have near the prominence of the actual outer physical reality, we still feel, see, hear, and recall what we were thinking about in full detail, and they produce a pronounced “internal affect” that colors our outer experiences to be of the same “feeling state”. This quality as more of an invisible, translucent image, that’s superimposed over the outer reality, becomes our “perceptual lens” that we “look through” and use to interpret our outer reality to be of the same nature or thematic idea. Through this translucent imagery as a lens, we restructure our outer reality, by abstracting, illuminating and activating only what matches it and can be used to form the same patterning as a feeling state, while not even noticing the elements that don’t lend themselves to expressing and creating more of the same feeling-states. Our attention operates as a form of “activating system” that pulls out what’s of the same idea while causing whatever isn’t to return to a latent, inactive state, and fade into the background. Through this means, we “filter” our outer, objective reality to match our internal imagined reality. 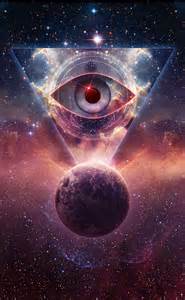 Whatever we think about and imagine, which simultaneously forms an intention and expectation, becomes the lens as an ordering –organizing mechanism that literally determines what we “see” by how our mind restructures it by forming a personal interpretation of it. Because of this natural ability of the mind, we literally create our own interpretation of reality, and everybody sees something different in the same situation based on this filtering mechanism produced by the imagination as the internal reality that becomes the template for rearranging the outer reality as a reconfiguration, while noticing only the things that can be readily incorporated in the story the internal reality tells, while completely ignoring or simply failing to notice anything that doesn’t naturally lend itself or acts to contradict our story.

The imagination is the faculty of the mind that structures a dynamic matrix out of accumulated memory, forming a mental paradigm through the creation and synthesis of the memories it’s comprised of, that transforms the outer to match the inner. The structure of the mind, as its vibratory frequency (corresponding series of interwoven patterns) literally reshapes the outer, objective and neutral reality, to be the same through how it’s interpreted to tell the same story that the paradigm is designed (structured) to tell. We first create our experiences out of our paradigm based on synthesizing accumulated memory, forming them into a new memory of the same kind of story, keeping ourselves programmed to the same type of memory as a life theme.

Memory is created in the imagination out of an actual event that we reshape, personalizing it, by giving it meaning. The meaning we give it forms the story we tell about it, which simultaneously means the same thing about us, about others, and about the way the world is in general. It defines us, the nature of our relationships, and the perceived conditions we live in. This accumulated memory forms a theme that tells a certain type of story. This thematic story becomes our perceptual filter that only creates more of the same type of experiences over and over, by how we think, what we’re always in the process of telling ourselves, and what we see or don’t see in the world around us. We begin interpreting everything by way of this theme, and then we identify with our own stories which simultaneously shape our identity. After a while, if we’re not telling (living) the same type of story, we don’t know who we are, or how to tell a different story. And so we live out of the same story as a mental projection most, if not all of our life, without ever realizing it’s our “own creation”, formed and kept alive through our imagination. Replayed and imprinted in our mind-field (Astral) that surrounds our body, like a reflection on glass that we look through to form our perception.

This is the most basic meaning of karma. We live out of the same type of memories as a storyline that creates us according to the identity required to “live” that story as the author of it and main character in it, that forms our perceptual lens as our paradigm that determines what we see, how we feel, and what story we act naturally to tell. We continue creating out of the same basic type of memory, forming the same realities, relationships, and interactive dynamics because we don’t realize that we’re actually the one creating it, and also, the only one who has the power to change it.

We can form purely creative ideas in our imagination that replicate actual memory. Because memory is created and replayed in the imagination and used to create our experiences, by imagining ideas with full sensory enhancement and feeling, we can provide our own mind with new ideas and patterns that will transform and evolve our perceptual lens to be able to tell new kinds of stories. In doing this, we simultaneously evolve our identity to new and higher forms of experience. We can keep ourselves in a constant state of growth rather than settling into a mundane and methodical existence where we live out of the same mind-set for a lifetime, missing the opportunity to create ourselves anew in every moment by learning to operate our own mind and exercising our creative abilities in the most primal sense . . . . by self-creating through our ability to produce virtual memories!

Learning to Discipline Your Emotions and Consciously Create your Experiences
One of the most prevalent ways we’re controlled by others and the events of our li...
Soul Memory and the Journey of Self-Creation through the Space-Time Continuum
The true nature of what we call time and space as "material reality" is elusive in the ultimate sense, yet quite obvious...
Self-Empowerment - The Relationship between Choice, Will, and Creation
This idea can seem confusing in terms of being able to actually employ it at the practical level because it involves di...
The Physics of the Soul, the Nature of Our Character, and the Holographic Nature of Reality
The most prevalent misconception formed in trying to understand the nature of the soul, comes by viewing it as being th...
Hypnosis – How it Works, and Why it’s so Effective
The term “hypnosis” refers to a state commonly called “trance”, which is where the body is in a fully relaxed state whil...
Vibratory Scale, Planes of Existence, and Parallel Dimensions
Vibration is energy that moves and vibrates in a circular, spiraling motion. The spiraling motion of vibration is create...
The Art of Modeling – How to Consciously Create Yourself
Our most basic ability to create in life is our ability to self-create by intentionally developing our cha...
How to Know God and Ascend in Spirit to Higher Dimensions
In order to intelligently consider this idea we have to start by defining what we mean by “God”, because this idea is d...